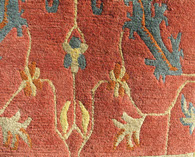 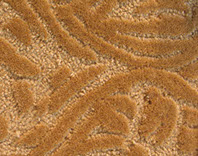 Woad, a plant of the mustard family, and indigo, a bush from the pea family, are used for blue dye.

Yellow is produced from saffron, safflower, sumac, turmeric, onionskin, rhubarb, weld, and fustic. Madder has been used since ancient times for reds. Redwood and Brazilwood are also used for reds. Browns and blacks come from catechu dye, oak bark, oak galls, acorn husks, tea, and walnut husks. Henna is used for orange. For green, indigo over-dyed with any of a variety of yellow dyes is used.

Some animal sources of dyes include insects such as Cochineal, found on cacti in Mexico; Lac, a wild version of Cochineal, found in India and Iran; and Kermes, found on Oak trees near the Mediterranean. All three produce a range of reds. Kermes was used in Europe, and Lac in Egypt and Persia until Cochineal, the cheapest of all three, gradually took their place. Kermes, the most ancient of all three, has been used even before the 16th century.

Dyers are able to get a variety of colors and shades from the same source depending on the type of material used, the characteristic of local water, and the use of different mordants. For example, from pomegranate skin they can produce a range of colors from red to black by using different mordants. Also, as with a painter's palette, all the primary natural colors employed could be mixed to produce a wide variety of secondary hues. Today, natural dyes are still used in some traditional dye-houses and villages where natural sources are readily accessible.

In the mid-nineteenth century, as the demand for handmade rugs increased in the West, their production increased in the East. The need for easy-to-use and less expensive dyes with wider range of colors caused the development of synthetic dyes in Europe and especially in Germany. Synthetic dyes were soon imported to Persia (Iran), Anatolia (Turkey), and other Eastern countries. The first synthetic dye, Fuchsine (a magenta aniline), was developed in the 1850s. Shortly after, other synthetic aniline dyes followed. Synthetic aniline dyes made from coal tar were brilliant, inexpensive, and easy to use; however, they faded rapidly with exposure to light and water. In 1903 Nasser-e-Din Shah, the Persian king of Qajar Dynasty, banned the use of aniline dyes in Iran. Persian weavers discontinued the use of synthetic dyes until the modern synthetic chrome dyes were developed in the years between the First and the Second World Wars. Chrome dyes are colorfast (any dye that retains its intensity despite exposure to light and water), and are produced in an infinite variety of attractive colors and shades.

Today, mostly chrome synthetic dyes are used for coloring weaving yarns. Natural dyes are used in places where they are easily obtainable. Sometimes the two are combined together in the same rug, and the weavers use the best type of dye available to them. In some cases they can find good quality dyes in nature, and in other cases they get better results from the synthetic dyes.

We could be confident that today whether we buy a rug made from natural or synthetic dyes, it will only improve with time. Even rugs made with aniline dyes in the late 19th century are valuable today because of their age.

The reddish wood of certain tropical trees or shrubs in the pea family, especially a Brazilian tree (Caesalpinia echinata) whose wood is used for violin bows and was a source of red, purple, and black dye in early Chinese rugs.

A spiny Asian tree (Acacia catechu) also called Betel Palm with spikes of yellow flowers, and dark heartwood. Tannins and brown dyes are derived from the heartwood of this plant. Catechu dye was used in rugs of India.

Any of various shrubs or herbs of the genus Indigofera in the pea family with odd-pinnate leaves and usually red or purple flowers. A yellow juice from the plant oxidizes to blue when exposed to air. Indigo was chemically synthesized in 1880.

Any of several plants of the Rheum family, especially R. rhubarbarum, which have edible long, green or reddish, acidic leafstalks. Yellow to copper-red dyes are derived from the leaves and used in rugs of China and India.

A southwest Asian long lasting plant (Rubia tinctorum) with small yellow flowers, spiraled leaves, and a red root. The root of this plant was and in some places still is an important source of red dye. Different mordants produce different colors with madder: aluminum for red, tin for oranges, chromium for reddish brown and iron for purple and black. Madder was mostly replaced in the 1870's by synthetic dye alizarin.

A widely cultivated tropical plant of India (Curcuma tinctoria) with yellow flowers and an aromatic root which is used as a spice and yellow dye.

A yellow dye is produced from the orange flowers of safflower (Carthamus tinctoria). This dye may have been used in some early rugs of China, India and Tibet. The flowers also produce seeds, which contain oil used for cooking, cosmetics, paints, and medicine.

A European plant (Reseda luteola) with long spikes of small, yellowish-green flowers. A yellow dye is derived from the stalks, leaves, and flowers. This plant is also called Dyer's Rocket.

A plant (Crocus sativus) with purple or white flowers with orange stigmas. The dried aromatic stigmas are used as food coloring, cooking spice, and dyestuff. Saffron may have been used to dye some early rugs of China, India and the Balkans.

A heavy reddish mercuric sulfide (HgS) that is the principle constituent of mercury and used as a pigment.

An opaque to translucent blue, violet-blue, or greenish-blue semiprecious gemstone composed mainly of lazurite and calcite.

A common sedimentary rock consisting mostly of calcium carbonate (CaCO3), used as a building stone and in the manufacturing of lime, carbon dioxide, and cement.

A light to dark green carbonate mineral {Cu2CO3(OH)2} used as a source of copper and for ornamental stoneware.

A black crystalline compound (MnO2) used as a depolarizer of dry-cell batteries and in textile dyeing.

Any of several earthy mineral oxides of iron occurring in yellow, brown, or red and used as pigments.

BACK TO THE TOP

HOME | ABOUT US | EVENTS | HISTORY of CARPETS | INTERESTING FACTS |  CONTACT US

Please call for an appointment to visit our showroom:

Hours: Monday thru Friday 10am – 5pm - By Appointment